The Absorbent Mind, Chapter 19: The Child’s Contribution to Society — Normalization 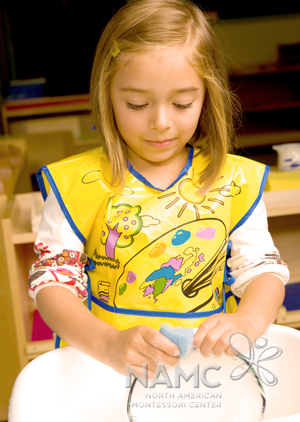 The transition from one state to the other always follows a piece of work done by the hands with real things, work accompanied by mental concentration.
—Maria Montessori
The Absorbent Mind, p. 204.

The Absorbent Mind, Chapter 19: The Child’s Contribution to Society — Normalization

In chapter 18, Montessori discussed two categories of character traits; those observed in children with strong wills and those observed in children with weak wills. In chapter 19, Montessori goes on to say that society groups children into three categories: those whose character or behavior needs to be corrected; those who are models of good, albeit passive, behavior; and those who are thought to be superior to others – these are often noisy, “exuberant” children whose parents think they are brilliant, even though others may not find them agreeable to be around. Montessori says that all of these characteristics/behaviors, good or bad, disappear “as soon as the children become absorbed in a piece of work that attracts them.” (Montessori, p. 201) The child has no desire to be good or bad; he only wants to be busy working with something that brings him joy.

When given the freedom to pursue his own interests without interruption or suggestion from adults, the child works in deep concentration and immediately develops self-discipline. Work that is driven from within and not urged upon him by teacher or parent becomes the child’s passion. With adult intervention, however, self-discipline breaks down.

Montessori describes this phenomenon as normalization, which comes through intense concentration on one’s work. “Only ‘normalized’ children, aided by their environment, show in their subsequent development those wonderful powers that we describe: spontaneous discipline, continuous and happy work, social sentiments of help and sympathy for others.” (Montessori, pg. 206–7) When children are free to choose an interesting piece of work that arouses and engages their interest, they will work independently. 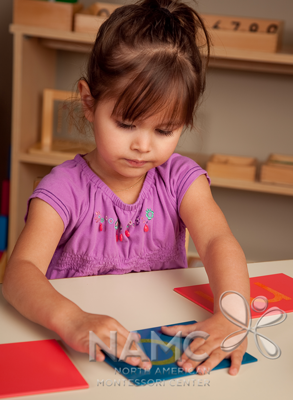 Freedom, however, is often misunderstood. When a teacher or parent interprets freedom too loosely and allows children to wander aimlessly, the children become disorderly, acting and reacting to their own impulses without proper modeling and guidance. “‘To let the child do as he likes,’ when he has not yet developed any powers of control, is to betray the idea of freedom.” (Montessori, p. 205) Disorderly children, often described as “naughty,” are then forced or coerced into obedience. Montessori says this is a vicious cycle: “The result is children who are disorderly because order had been arbitrarily imposed upon them, children lazy because previously forced to work, children disobedient because their obedience had been enforced.” (Montessori, p. 205) In short, letting children just do as they like increases undesired behavior. 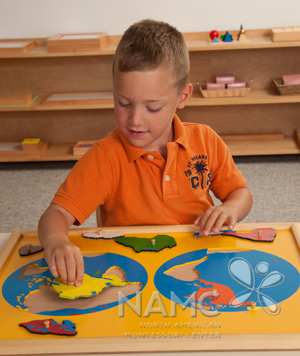 Real freedom comes from within. It must be nurtured and developed through the use of education. Learning to use materials and work with precision and care nurtures the children’s concentration. They become interested not just in the product but in the process of their work. They refine their movements and become masters of their craft.

Mind and body working harmoniously together on real, engaging work satisfies their need to be productive and engage with their community in a joyful manner.

In other words, “Work is love made visible.” (Kahlil Gibran, The Prophet; as cited in Montessori, p. 207)

As much as possible, NAMC’s web blog reflects the Montessori curriculum as provided in its teacher training programs. We realize and respect that Montessori schools are unique and may vary their schedules and offerings in accordance with the needs of their individual communities. We hope that our readers will find our articles useful and inspiring as a contribution to the global Montessori community.
© North American Montessori Center - originally posted in its entirety at Montessori Teacher Training on Wednesday, August 20, 2014.
Posted by North American Montessori Center
Labels: Montessori Philosophy, Normalization, Studying Montessori, The Absorbent Mind
Newer Post Older Post