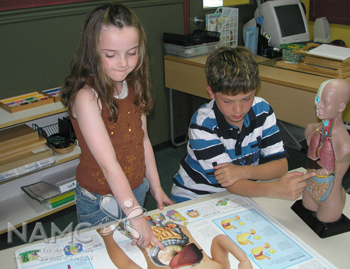 There are two main types of shelf work in the Montessori environment. The first is the Montessori materials themselves. The second consists of a series of cards known as command or task cards that provide follow-up work to lessons and activities. Students work with command cards to practice what they have learned. As the name implies, command cards invite the child to do something with what they have learned, showing that they have command of the concept.

An example of command cards common in upper elementary programs appears in the nomenclature work. In the Montessori classroom Nomenclature Cards, also known as three-part cards, are used to learn the names or parts of objects. The material is made up of three parts: a picture card, a label card, and a control card. For elementary students, a fourth card is added that relates to the definition of the object or part. 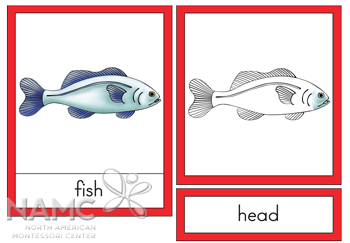 This is a picture of a typical three-part Nomenclature Card that is used in the Montessori early childhood environment. It consists of the control card on the left and the matching picture and label cards on the right. If I were making this for the lower elementary environment, I would include a fourth card with a definition explaining the function of the head. For upper elementary students, I would include a command card rather than a definition card. After matching the picture and label cards, the upper elementary student would read the command card asking him to write his own definition of the word in his science journal. (To learn more, please read our blog on Montessori Nomenclature Cards) 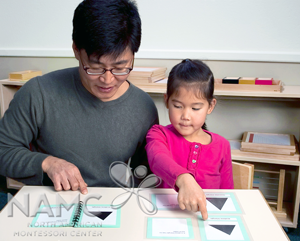 In the Montessori early childhood environment, command cards are used as a reading exercise. The young child takes a card, reads the command, and then, as in charades, acts it out.

In the lower and upper elementary environment command cards promote higher-level thinking skills by asking students to think about and apply what they have learned.

When I make command cards, I refer to Bloom’s taxonomy and think of tasks that promote synthesized learning.

Command cards take the place of worksheets and workbooks that you find in traditional classrooms. Instead of providing busy work, command cards ask students to apply their knowledge in new and interesting ways, which leads to them internalizing the knowledge and storing it in their long-term memory. Working with command cards, students are able to choose how they construct and demonstrate their learning, which makes the learning more meaningful to them.

When creating command cards for your students, keep in mind the range of topics you can include. You can offer command cards in a variety topics within each of the subject areas. The tasks that you include should appeal to the various learning styles and preferences found within your Montessori elementary classroom. You can also refer to Bloom’s taxonomy to ensure that you provide students with tasks that relate to each level of learning. Equally important is being sure to keep the tasks related to high interest, real-world situations.

Command cards offer direction and choice to student learning. By creating a classroom set of command cards, you are encouraging your students to freely explore the curriculum and the world around them.

As much as possible, NAMC’s web blog reflects the Montessori curriculum as provided in its teacher training programs. We realize and respect that Montessori schools are unique and may vary their schedules and offerings in accordance with the needs of their individual communities. We hope that our readers will find our articles useful and inspiring as a contribution to the global Montessori community.
© North American Montessori Center - originally posted in its entirety at Montessori Teacher Training on Thursday, August 7, 2014.
Posted by North American Montessori Center
Labels: Lower Elementary (6-9), Montessori Curriculum, Upper Elementary (9-12)
Newer Post Older Post