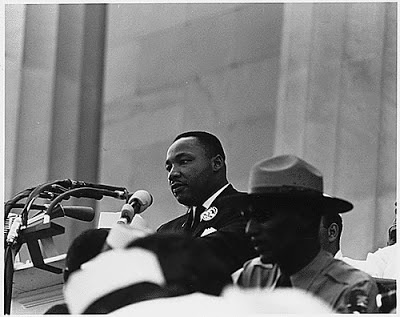 “I have a dream today . . . that one day . . . little black boys and little black girls will be able to join hands with little white boys and little white girls as sisters and brothers. . . “I have a dream that my four little children will one day live in a nation where they will not be judged by the color of their skin, but by the content of their character.” Martin Luther King Jr., August 28, 1963

In the first of my series on Peacemakers, I have chosen to examine the life of Martin Luther King Jr. and the impact that he had on equal rights in the United States. Born the son of a Black Baptist minister, Martin Luther King, Jr. (1929-1968) believed, like Mohandas “Mahatma” Gandhi, that the power of love was greater than the power of hate. His beliefs led to his own non-violent crusade against racial segregation in America.

Read on for inspiring information, as well as a class discussion topic and classroom activity idea.

Throughout time, the word “peacemaker” has been used to describe someone who creates peace by ending conflict. Though, for as long as huma...

Developing and building a strong sense of community within your Montessori school is essential to the success of the school. This can be a...

The Importance of Educating the Montessori Parent

In 2007, The American Montessori Society researched how families found out about their Montessori School. 55% - Heard about it from a fr...

Choosing the Right Montessori School as a Teacher

When searching for the right Montessori school in which to teach, many of the same considerations should be taken as if you were a parent ...

Being a Montessori Parent: A Family Decision

So, you've decided to research Montessori education as a possibility for your child. You've attended parent information sessions, ...

A Parent's Guide to Observing in a Montessori Classroom

In a previous blog, A Parent's Guide to Choosing the Right Montessori School , I discussed what to look for in a Montessori school. Fo...

A Parent's Guide to Choosing the Right Montessori School