Academic and Social Competition in the Montessori Classroom

A grade is an inadequate report of an inaccurate judgment by a biased and variable judge of the extent to which a student has attained an undefined level of mastery of an unknown proportion of an indefinite amount of material. ~Paul Dressel, Grades: One More Tilt at the Windmill, (1976)

…our emphasis should be less on student achievement (read: test scores) than on students’ achievements. ~ Alfie Kohn, “Debunking the Case for National Standards: One-Size-Fits-All Mandates and Their Dangers”, Jan. 14, 2010 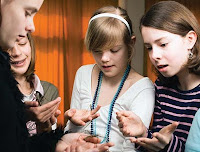 It happens every year. Even though it has been explained from the very first inquiry about the Montessori school and is in the school contract and handbook. Even though I make sure to cover it at Back-to-School night, I guarantee it will happen at least once during the year, usually during parent conferences. A parent leans in a little closer, conspiratorially, and says “Come on. This Montessori stuff is all well and good, but seriously, what grade would you give my child? I won’t tell anyone you said anything. We’ll keep it between you and me.”

Grades… A tangible descriptor that measures the level of knowledge in a standard course of study, relying on some sort of subjective interpretation of student performance and achievement. Most of us went through school “being graded”. Students are even told that they reason they go to school is to get good grades. In fact, parents teachers use getting “good grades” as an extrinsic motivator; children are rewarded for their achievements and punished for their failures. Yet studies, some dating back 100 years, show that people who are “graded” learn differently from those who aren't. They tend to prefer to find the easy way out, quickly lose interest, and, when all is said and done, forget what they've “learned”. Getting an education becomes more about competition than learning.

I have found that my Montessori students are easily engaged with and interested in environmental concerns. Environmental studies easily i...

Recess and outdoor activities are opportunities for a Montessori teacher to show her/his students how Montessori Peace and Cosmic Educati...

Montessori Language Arts to Engage Your Students Through Summer

Ah, summer – a time for rest, relaxation, and recharging. I always have a full list of personal activities for this time away from the Mont...

This is the final of a four-part series on Sensory Processing Disorder. For related NAMC blogs, please click on the links at the end of this...

Although not every school has a “graduation” for their Preschool / Kindergarten classes, it is common to mark the end of the year with a d...

…To lead the child from the education of the senses to ideas. ~Edouard Séguin The studies conducted by Edouard Séguin and Maria Mont...

The education of early childhood should be based entirely upon this principle: Assist the natural development of the child . Maria Montessor...

The end of the school year is drawing near and it is never too soon to start preparing at your Montessori school. Here are some ideas to he...