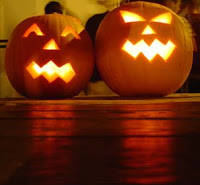 The observance of Halloween originates back to the ancient Celtic New Year’s festival, celebrated on November 1, which marked the end of the harvest and the beginning of a cold, dark winter. The Celts believed that on the night before the New Year, the worlds between the living and the dead were blurred and that ghosts returned to earth on this night to cause trouble and damage crops. Druid priests built huge bonfires where people gathered to burn crops and offer animal sacrifices to the ancient deities. During the celebrations, the Celts usually wore costumes made from the skins and head of animals.

During the 400 years that the Romans ruled ancient Celtic lands, they incorporated Samhain into their two fall festivals: Feralia and Pomona. Feralia was the feast held to commemorate the passing of the dead, while Pomona was the goddess of fruit and trees. Pomona’s symbol was the apple, thus providing a tie to “bobbing for apples” as well as caramel and candy apple treats to modern Halloween. Read on for more interesting history, and some fun and Montessori appropriate Halloween activity ideas.

“And a Little Child Shall Lead Them” The most beautiful thing happened in my Montessori classroom today. I called everyone to morning ci...

Homework in the Montessori Classroom: Does it Actually Help Students?

I did something this year that I've always wanted to do. I’m NOT assigning homework. For several years I've struggled with assign...

How Progress Reports Work in the Montessori Classroom

I know I’m not alone when I say that one of my least favorite tasks is writing progress reports. Montessori teachers take extra time to per...