Studying Time Zones in the Montessori Classroom: History and Activities 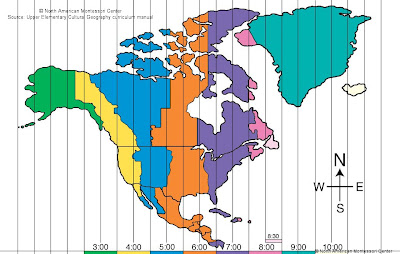 I was so tired last week! A week ago Sunday, at 2 am, the United States returned to observing Daylight Saving Time. That is to say, most of the United States, Canada, and many other countries, set their clocks ahead one hour, causing the majority of us to “lose” one hour of sleep.

Read on for history, information and activities you can use for studying Time Zones in your Montessori classroom.


The History behind Daylight Saving Time

Since the dawn of man, humans have measured time by the position of the sun. At noon, the sun is highest in the sky. Sundials were used until well into the Middle Ages. Cities set their clocks according to the sundials. Thus, different cities had different times, according to the sun. Later, as we became more industrialized, there came the need to make “time” more standardized. Standard time zones in the United States were first instituted in 1883 by the railroads, but were not officially recognized or established until 1918 with the Standard Time Act.

Teaching About Time Zones in the Montessori Classroom

Cultural Geography is the study of specific places and peoples, with an emphasis on the interaction of the two. Understanding the concept of time is part of the work of Cultural Geography. When studying about time, it is important for students to understand that the earth is divided both by longitude and latitude, creating Northern and Southern Hemispheres as well as establishing Eastern and Western Hemispheres. (You might want to review these using a globe). 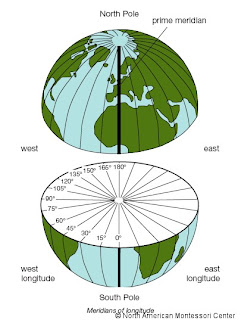 It is important for students to remember that meridians of longitude provide the basis for time zones. These meridians divide the earth into 24, 15 degree sections, with each section corresponding to an hour of the clock. Each time zone advances the clock by one hour from west to east, creating what is commonly known as standard time. With standard time, each time zone experiences noon when the sun is directly overhead and midnight when the sun is on the opposite side of the earth.

One way to concretely demonstrate the abstract concept of time zones with a globe and stickers labeled with 10 am, 11 am, noon, 1 pm, and 2 pm. Invite a student to place the sticker labeled “noon” on the globe, nearest the meridian in which you live. Discuss standard time and point out the 24 meridians, as well as the west to east movement of the sun. Remind them that one way to remember the progression of time zones is to think about which way the sun moves across the sky. Since the sun moves to the west, it is always closer to night time to the east of any position. Then, invite other students to place the rest of the time labels on the globe.

Although she didn’t say it, I think Dr. Montessori would have agreed that “Just as sunflowers turn their heads to catch every sunbeam, so too have we discovered a simple way to get more from our sun”. See Webexibits website. NAMC’s Lower Elementary Physical Geography manual reviews Time Zones, with extension activities for the classroom, while the History manual for the same ages reviews The Concept of Time, and linking the Past, Present and Future. See NAMC's Lower Elementary curriculum. NAMC's Upper Elementary Cultural Geography manual has a section on Longitude & Latitude which covers time zones. See NAMC's Upper Elementary curriculum.
As much as possible, NAMC’s web blog reflects the Montessori curriculum as provided in its teacher training programs. We realize and respect that Montessori schools are unique and may vary their schedules and offerings in accordance with the needs of their individual communities. We hope that our readers will find our articles useful and inspiring as a contribution to the global Montessori community.
© North American Montessori Center - originally posted in its entirety at Montessori Teacher Training on Monday, March 17, 2008.
Posted by North American Montessori Center
Labels: Geography, Montessori Activity Ideas, Montessori Culture and Science, Montessori Curriculum
Newer Post Older Post