Peaceful Solutions to Bullying in the Montessori Classroom 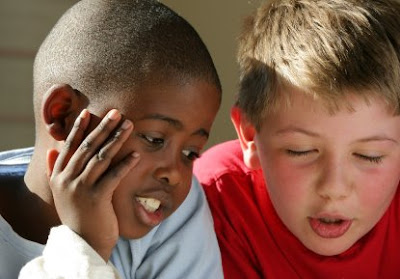 I was shocked last week when my assistant came back from walking my Montessori class to art and told me that one of my third grade boys had punched one of the second grade boys three times in the stomach. Apparently, this happened while he was holding the door open for the rest of the class! I couldn't believe it! Whatever possessed him to do such a thing and why would he think it was acceptable to do this? His answer was not a surprise, but still alarming: "My older brother does it to me all the time."

It got me to thinking about behaviors at home versus behavior at school. I know that boys usually play more aggressively and more physically than girls. My own son has loved to wrestle and rough-house since he was very young, though now he's almost as big as I am and needs reminders to play gentle with Mommie. I watch the boys on the playground play tag, football, capture-the-flag and marvel at the sheer physical stamina they display. Yet, hitting and other physical demonstrations are not acceptable either in my home or in my Montessori classroom and playground.

Peaceful Solutions to Bullying in the Montessori Classroom


Every school I've taught at has had a "Stop!" rule. If someone is doing something to you that you do not like, all you need to do is say "Stop" and the other person is required to stop whatever it is, no questions asked. If the behavior continues, the child is then to come tell a teacher. We tell the children that this is not tattling, but it's to make the teacher aware of the situation so he or she can intervene on their behalf.

Getting a child (or even an adult) to understand that we don't hit (or hit back) can be difficult if they've been taught at home that it's acceptable. We need to explain to them that hitting doesn't work.

We need to give children ways to get out of situations where they feel they need to strike back.

Choosing not to fight or hit takes courage. In truth, it's very hard to fight the urge not to hit back, especially when you are angry. Children need lots of practice at peacemaking. Role-play different scenarios so that they understand what they can do in many situations. It can also help them recognize things that really get them angry and give them useful solutions when they find themselves getting angry.


As much as possible, NAMC’s web blog reflects the Montessori curriculum as provided in its teacher training programs. We realize and respect that Montessori schools are unique and may vary their schedules and offerings in accordance with the needs of their individual communities. We hope that our readers will find our articles useful and inspiring as a contribution to the global Montessori community.
© North American Montessori Center - originally posted in its entirety at Montessori Teacher Training on Friday, March 7, 2008.
Posted by North American Montessori Center
Labels: Modeling Behavior, Montessori at Home, Peace, Redirecting Behavior, Student Conflict
Newer Post Older Post