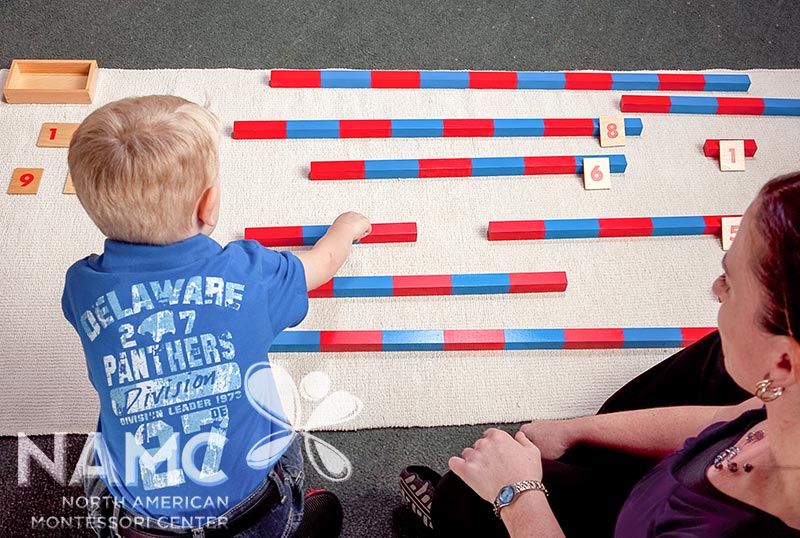 When Jordan first began preschool, he was able to recognize numbers 1 through 5, but had not yet grasped the quantity associated with each number. He could count on his own, but struggled with counting the actual quantities. He had a tendency to count much too quickly, and of course, that is often when errors were made.

The Montessori Number Rods were instrumental in helping Jordan learn to slow down and really understand each individual quantity.

The Number Rods are the same as the Red Rods, except they have alternating blue and red segments. The first thing I asked Jordan to do with the Number Rods was build a stair, just as he did with the Red Rods. When the stair was complete, he was still keen to continue, so I introduced the first three rods to him via a three-period lesson. After the third rod, he was still attentive and focused, so we were able to continue with the next three rods. We stopped at the 6 rod as I could tell Jordan was starting to get tired.

Over the next few weeks we continued our work with the Number Rods and eventually he was able to pair each rod together with the corresponding numeral … way to go Jordan!

The Number Rods are great for teaching one-to-one correspondence and it is made simple for the children because the quantities are fixed.

The Number Rods also provide a visual understanding of the order of numbers (three goes between two and four). Jordan is now more than ready to begin work with the Spindle Boxes!

As much as possible, NAMC’s web blog reflects the Montessori curriculum as provided in its teacher training programs. We realize and respect that Montessori schools are unique and may vary their schedules and offerings in accordance with the needs of their individual communities. We hope that our readers will find our articles useful and inspiring as a contribution to the global Montessori community.
© North American Montessori Center - originally posted in its entirety at Montessori Teacher Training on Monday, May 9, 2011.
Posted by Bree
Labels: Montessori Insights and Reflections of a Preschool Student’s First Year, Montessori Materials, Montessori Math Studies, Preschool/Kindergarten (3-6)
Newer Post Older Post