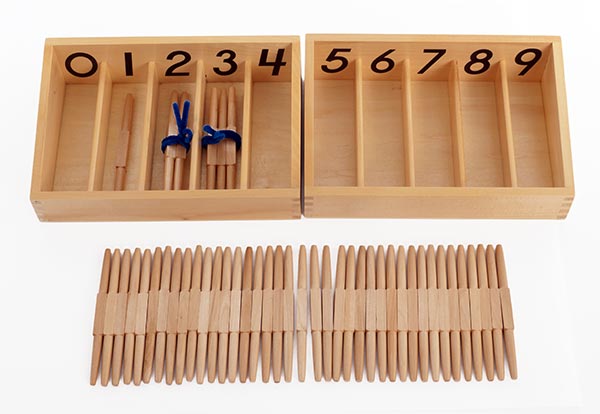 Jordan has grown leaps and bounds since he began Montessori preschool/kindergarten in September, and it is interesting to reflect back on his journey. Once Jordan had mastered the Number Rods and could correctly pair each rod together with the corresponding numeral, I introduced him to the Spindle Boxes. The numbers on the box are fixed, yet the quantity is free moving, which definitely provides a greater challenge.

On his first try, Jordan was able to place the correct amount of spindles in each compartment and was very proud that he did it without any help. He also liked the fact that he didn't get “tricked” by the ‘0’ compartment … he knew right away not to put in any spindles. I knew he was clearly ready to give the Numbers and Counters a try!

I pointed to the number ‘1’ and asked him to tell me the name of the symbol. Jordan responded, “one”. Next, I asked if he would place one Counter below the number one. We continued in this manner all the way to the number 10, and I showed Jordan how to place the Counters in pairs.

Placing the Counters in pairs below each Number is a wonderful visual for demonstrating the concept of odd and even numbers.

Jordan still enjoys working with the Numbers and Counters. Every time I change the Counters, it seems to renew his interest in the activity. Some of the Counters he has enjoyed the most include: pennies, shells, smooth river rocks, pieces of “gold”, and most of all, the dinosaur counters!

As much as possible, NAMC’s web blog reflects the Montessori curriculum as provided in its teacher training programs. We realize and respect that Montessori schools are unique and may vary their schedules and offerings in accordance with the needs of their individual communities. We hope that our readers will find our articles useful and inspiring as a contribution to the global Montessori community.
© North American Montessori Center - originally posted in its entirety at Montessori Teacher Training on Friday, May 27, 2011.
Posted by Bree
Labels: Montessori Insights and Reflections of a Preschool Student’s First Year, Montessori Materials, Montessori Math Studies, Preschool/Kindergarten (3-6)
Newer Post Older Post