Three Before Me and Correctly Interrupting: Serenity in the Montessori Classroom 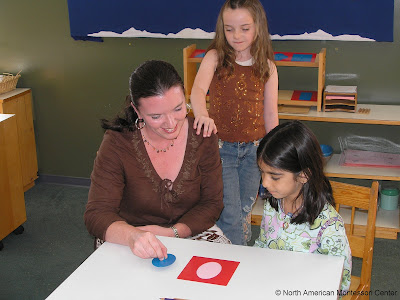 After I completed my Montessori training, I was filled with wonder and excitement. I was eager to have my own Montessori classroom filled with normalized children who chose their own work, begged for more lessons, worked quietly and respectfully, joyfully cleaned up after themselves, and didn't interrupt. Now I’m not saying that didn't happen, but it probably wasn't to the extent I had hoped for.

One of the most difficult tasks I encountered was children interrupting while I was presenting a lesson. Thinking they were just unaware of how to ask for help, I decided to hold a class meeting on what to do about the constant stream of interruptions of children asking for help. What came out of that meeting surprised me. They did know what to do.

“Miss Michelle, if we have a question and you are in a lesson, we should look for Miss Jen. If Miss Jen is speaking with a student, we should silently touch her on the shoulder so she knows we are waiting.”

I even asked them to demonstrate this by role modeling. It was beautiful! We agreed together that this was the right approach and that we would start this method back up right away.

Naively, I thought I had the situation well under control...
Wrong!!!

Three Before Me and Correctly Interrupting: Serenity in the Montessori Classroom

My very next lesson, I had at least three students interrupt my presentation. That afternoon, I sat and observed students interrupt my assistant while she was working with other students. Puzzled, I went back to my manuals and reaffirmed that the best way to ask a Montessori teacher for help is to quietly approach and place a hand on her arm or shoulder (or for older ones, to simply wait quietly nearby). I also reread the sections on peer mentoring in the multi-age classroom.

Next, I went about conducting some observations in different Montessori classrooms in my school. This method seemed to work very well in the 3-6 classrooms. Children were respectfully waiting by their teachers’ sides until they finished working with others. There was still some of that happening in the lower elementary (6-9) classrooms, but when I got to the upper elementary (9-12) classrooms, it was as if this practice was no longer necessary. Disenchanted, but not discouraged, I set about trying to figure out what to do.

I stumbled across an audio tape of a seminar given at a Montessori conference in Chicago on classroom management and expectations in the Montessori classroom. As I was listening, the speaker addressed exactly what I was experiencing in my own upper elementary classroom (and later, my lower elementary classroom). Children were constantly interrupting teachers giving lessons. It was then, that I learned about “Three Before Me”.

Children who are not yet normalized are used to going to the teacher first for help. What surprised me was that children who were “raised” Montessori, also started going to the teacher first. After hearing about “Three Before Me”, I called another class meeting. This time, I shared my observations of the interruptions that were still happening in the classroom. I shared with the students that I was feeling frustrated and I told them of a new concept I had heard about. After sharing it with them, they were eager to try it out.

Three Before Me
The concept is simple. Before approaching a teacher, the child must ask at least three peers for help. If after three peers, the child still does not understand (or is dissatisfied with the answer), he/she may then approach the teacher. I emphasized with my students that this did not mean that they were then free to interrupt. I asked their input as to how they thought they could make their presence known. They decided to use the name tags that we used to mark our work. They placed a small basket in the center of the classroom and anyone who had a question could put their name tag in the basket. After the lesson, the teacher would then check the basket and help whoever needed it.

The children were very enthusiastic to try this out. It seemed that they needed the extra reassurance that it was alright to ask a peer. We joyfully left the meeting determined to give it a try.

The next time I presented a lesson, a student came up and started “Miss Michelle…”. Before he could finish, I very gently held up three fingers and quietly stated “Three Before Me”. He quickly nodded, turned away, and found a friend to help. This happened quite a bit over the next few days but the children quickly got used to it. I was able after a day or two to simply hold up three fingers without speaking and they would go and seek a peer. I also started hearing students remind other students “Three Before Me”.

After a few days, my students were no longer interrupting while teachers were presenting lessons or helping others. Calm had returned and the children felt more empowered. When we discussed it at our next class meeting, the children said it was a liberating feeling and they appreciated being able to ask their friends. They also said they appreciated being able to have a lesson without interruptions. As teachers, we said we appreciated not being interrupted while we were helping students learn and that we felt proud that they were acting so responsibly and respectfully toward one another.

I soon heard from other teachers about the transformation in my classroom. When I explained what had transpired and how simple it was to implement, they, too, started employing “Three Before Me” in their classroom.

Sometimes it’s easy to assume that just because it’s a Montessori classroom, the obvious does not need to be stated or that rules do not need to be reviewed. Without lecturing, classroom management issues can be addressed when a little creativity and mutual respect is applied.

NAMC's Practical Life manuals include a section on social graces.

As much as possible, NAMC’s web blog reflects the Montessori curriculum as provided in its teacher training programs. We realize and respect that Montessori schools are unique and may vary their schedules and offerings in accordance with the needs of their individual communities. We hope that our readers will find our articles useful and inspiring as a contribution to the global Montessori community.
© North American Montessori Center - originally posted in its entirety at Montessori Teacher Training on Friday, October 10, 2008.
Posted by Michelle Irinyi
Labels: Best Advice to New Teachers Series, Classroom Advice, Independence, Lower Elementary (6-9), Montessori Routines, Teacher Worries, Upper Elementary (9-12)
Newer Post Older Post