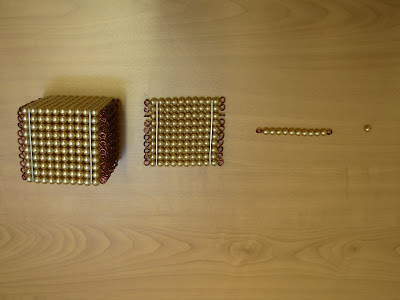 We all strive for it…that perfect, quintessential Montessori moment. Hours are spent preparing the environment. Lessons are practiced and perfected before being presented to our students. We read and re-read Dr. Montessori’s books in an effort to glean more insight into the method and philosophy that will transform our classroom into the perfect Montessori classroom. We agonize over how we can use our observation skills to monitor and adjust our own habits. And when that one, perfect Montessori moment happens, it’s enough to bring tears to your eyes at the joy, beauty, and simplicity of standing back and watching the children learn.

I had such an experience in my Montessori classroom today that I would like to share with you.


My first graders are struggling with place value. It is apparent that most of them have not yet had the opportunity to practice with the Golden Bead material. I have been working on static one-digit addition, while at the same time, demonstrating lessons with the Golden Beads. I have some wonderful new material that I shared with them today: Place Value Matching Cards.

I rolled out my mat, had my cards on hand, and called half of my first grade class for a lesson. (There are 11 of them total!) I told them I had a brand new Montessori material to present to them and they were going to be the very first ones to use it. This, of course, had them all very excited. I proceeded to silently lay out my first column of cards. They watched with eager anticipation:

When I was finished, we read the numbers together. Then, I silently laid out my second column of cards. 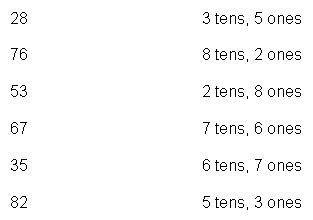 Then, we read the second column together. I demonstrated how to match the “words” with the number. Then, I called on each of them to match the cards. They were so excited. Suddenly, it all made sense! Before I dismissed them to call the next group to the lesson, I showed them where the work was on the shelf, told them they could choose it on their own, and that when they had finished laying it out, to ask a teacher to look it over. I had 10 sets of cards, each progressively more difficult than the previous.

Later that morning, I noticed two first grade boys cleaning up a set of cards. I walked over and asked if they could demonstrate their work to me, as they had chosen a level that was much more difficult than what I had presented earlier. They agreed and I sat back to watch.

One boy silently laid out the numbers, then, silently handed the deck to the other boy, who proceeded to silently lay out the “words”. They were both very careful to line the cards up just right. Then, I expected them to just start moving the cards around, eager to complete the work quickly. What happened both delighted and astonished me.

The first boy pointed to the first number with his small index finger, and in a quiet whisper, asked the first boy “What number is this?” The second boy paused, as if measuring the enormity of the task. “28”, he whispered back.

“That’s right. Which words say ‘28’?” the first boy whispered. The second boy slowly and carefully slid the card over that said ‘2 tens and 8 ones’. Now, it was his turn to point to a number and whisper “What number is this?”

The lesson couldn’t have turned out better! The boys were so absorbed in their work that nothing else in the room mattered. Watching their intense concentration, one would have thought they were solving the problems of the universe. And to them…they were. As I sat there in silence, my eyes teared up. I was so proud of them. When they were finished, they looked at me and solemnly asked “Miss Michelle, now do you understand?” I thanked them for their presentation and I said a silent prayer to Maria Montessori: Thank you, Dr. Montessori, because today, I do understand.
As much as possible, NAMC’s web blog reflects the Montessori curriculum as provided in its teacher training programs. We realize and respect that Montessori schools are unique and may vary their schedules and offerings in accordance with the needs of their individual communities. We hope that our readers will find our articles useful and inspiring as a contribution to the global Montessori community.
© North American Montessori Center - originally posted in its entirety at Montessori Teacher Training on Wednesday, September 19, 2007.
Posted by Michelle Irinyi
Labels: Experience, Inspirational, Learn From Students, Montessori Math Studies, Montessori Philosophy
Newer Post Older Post