Montessori Classroom Management: Sometimes Students Will Be Hard to Handle 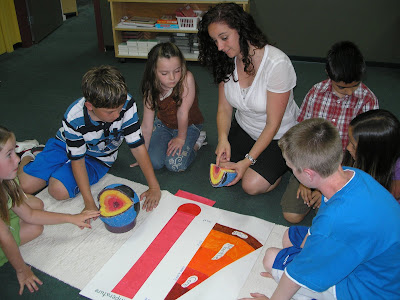 We've been in school for five weeks and today, the class seemed to fall apart. The noise level was off the charts and it didn't seem to matter how many times we rang the bell and asked for quiet voices, the volume level didn't fall. My assistant and I walked around our Montessori classroom, using our whisper voices, role modeling, and asking students to work quietly. It seemed like we were trying to put out a forest fire because we’d get one group of Montessori students working quietly, and another group would erupt in “outside” voices.

It wasn’t only in our Montessori classroom. One little boy punched another, older boy, in the stomach during recess. Although there were witnesses, the younger boy categorically denied it, while the older boy was standing there crying. After Spanish, Señora took me aside to tell me that one of my little girls couldn’t concentrate because she had a tangle in her hair; another played under the table during the Montessori lesson; another boy made repeated trips to the bathroom during the half hour lesson. The same boy from recess? He stuck his tongue out at another and the two of them ended up at the peace table during the Montessori lesson.

What in the world was going on?


It’s not a full moon. I know; I checked! We queried that perhaps, a storm was coming to our drought ridden area and the children could “sense” it. My Montessori school director walked by and asked me how it was going. I told her it was like the Friday before a long vacation. Interestingly enough, other Montessori teachers throughout the building were observing the same thing in their classrooms.

When I went back to my room after dismissal, my assistant was sitting at a desk, exhausted. “They were just plain naughty today”, she told me. I started to agree, but then, thought of what Dr. Montessori would say. I remembered that she used the term naughty to describe behavior that was immature rather than immoral or wrong. In a lecture in 1946, she had this to say about misbehavior in children:

"They [misbehaviors] are merely his reactions to an environment that has become inadequate...But we do not notice that. And since it is understood that the child must do what adults tell him, even though his environment no longer suits his needs, if he does not comply we say that he is "naughty" and correct him. Most of the time we are unaware of the cause of his "naughtiness". Yet the child, by his conduct, proves what we have just said. The closed environment is felt as a constraint. . .” (Maria Montessori, From Childhood to Adolescence)

After reflecting on this, I gently reminded my Montessori classroom assistant that the children were not being naughty, but rather, acting in accordance to the environment in which they found themselves. Dr. Montessori said that “Only exercise and experience can correct a disability, and it takes long practice to acquire the various kinds of skills that are needed. The undisciplined child enters into discipline by working in the company of others: not by being told he is naughty.”

So, tomorrow is another day. We will joyfully greet each student, assuring him/her that we are glad they are in our classroom. We will begin the day by modeling calm, quiet voices and a demonstration of personal space by a mini-lesson on walking around, not on, a rug. We will reflect on the good that’s happening in our Montessori classroom and not dwell on the negative.

“Discipline must come through liberty. . . . We do not consider an individual disciplined only when he has been rendered as artificially silent as a mute and as immovable as a paralytic. He is an individual annihilated, not disciplined.” (Maria Montessori, The Montessori Method)

NAMC has created a most comprehensive Montessori 6-12 Classroom Guide  that provides much-needed and asked-for direction in the following areas:

As much as possible, NAMC’s web blog reflects the Montessori curriculum as provided in its teacher training programs. We realize and respect that Montessori schools are unique and may vary their schedules and offerings in accordance with the needs of their individual communities. We hope that our readers will find our articles useful and inspiring as a contribution to the global Montessori community.
© North American Montessori Center - originally posted in its entirety at Montessori Teacher Training on Wednesday, September 12, 2007.
Posted by Michelle Irinyi
Labels: Best Advice to New Teachers Series, Learning Difficulties, Montessori Philosophy, Most Challenging Student Series, Redirecting Behavior, Student Conflict, Teacher Worries
Newer Post Older Post