Why Choose Montessori? Montessori vs. Constructivism: An Explanation of Montessori Philosophy 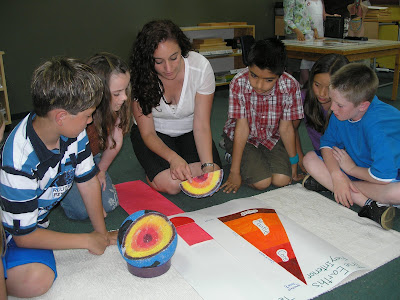 Why choose Montessori for your child? Before you can answer why, it is important to understand what Montessori is. Mark Powell wrote an article in Montessori LIFE (Winter 2000) called Can Montessorians and Constructivists Really Be Friends?, which provides a good background into what traditional educational systems are and what is different about Montessori.

The purpose of conventional education is to relay knowledge, skills, and standards of behavior which have previously been decided upon in order to prepare children for their future responsibilities.

The teacher provides the stimulus and is the most important figure in the classroom; the environment and materials play a secondary role. The curriculum is separated from every day life and has little contextual meaning. Students, often likened to “blank slates” or “empty vessels”, are expected to “learn” this information and regurgitate it back to demonstrate that they have “mastered” the material. Very little emphasis is given to creative, original thought, and success is heavily weighted in favor of memorized facts. Students are motivated by reward or punishment, which is thought to facilitate learning.

However, there is a problem with this paradigm. Since students simply need to parrot-back the curriculum, it does not lend itself to the development of higher-level thinking skills. Because there is rarely any student interest in the material being taught, for the most part, students simply memorize facts to pass the test, and then quickly forget them.

Why Choose Montessori for Your Child? Montessori vs. Traditionalism Constructivism


Constructivist theory, as proposed by John Dewey, “father of modern education”, is an attempt to right the wrongs of the traditional didactic approach, (i.e., knowing all the state capitals). The task of the constructivist teacher is to help students form their own questions and opinions and help them explore and interpret the results of their research. Constructivists see learning as a three-step process: discovery, concept introduction, and concept application.

There are five major tenants of Constructivist theory:

The child begins to speak because his development leads him to do so. The child does not develop because he wishes to utilize these developments. The child does not reason in this way: “Because I wish to walk from here to there I will begin to develop my capacity for walking in order to do so.” He does not say, “I wish to develop language so that I shall be able to ask for food when I am hungry.” No. We have first the development, and it is only a subsequent period that the human individual utilizes this development. . . .There is then a whole period when the child does exercises in themselves without any purpose of the doing of the exercise in themselves; and this form of exercise requires great effort on the part of the child. . . .Thus, little, by little, as the child develops his reasoning power he also develops the capacity for the utilization of his development; the two things go along side by side; he utilizes this development of the power of reasoning as his reasoning develops. . . .We may say that the great difference [between traditional and Montessori education] lies in the life, vivacity, interest, and joy which the child shows in doing the work and also the facility and precocity with which he learns. (Maria Montessori, 1913)

Maria Montessori, like Dewey, was also part of what is known as the cognitive-development movement. Her work as a doctor and scientist set the stage for her theories on “planes of development” and “sensitive periods” in children. She also recognized the need for repetitive behavior (motor and mental) for cognitive development, as well as the importance the environment plays in stimulating children’s mental growth and health. As seen in the above quote, Montessori thought it futile to try to accelerate a child’s development beyond their ability at the moment.

Like Dewey, Montessori stressed that experience is not just passive responses to stimuli (lessons). “In such a school the children, like butterflies mounted on pins, are fastened each to his place, the desk, spreading the useless wings of barren and meaningless knowledge which they have acquired” (Montessori, 1964, p. 14). In fact, her views often foreshadowed those of constructivist theorists: “The known establishes itself in the child as a complex system of ideas . . . actively constructed by the child himself during a series of psychical processes representing an internal formation, psychical growth. (Montessori, 1965, p. 162-3).

Montessori’s philosophy is based on both psychology and biology. She incorporated the ideas from many people.

Montessori believed that between ages 3-6 children are in a conscious sensitive period to language, order in the environment, and the love of tiny objects. Children in this plane of development are driven to construct themselves and are absorbed in the skills which move them towards independence. Learning is directed inward as they learn to manage their own lives.

By the age of 6, children are more interested in the origins of language and the scientific world around them. They like aesthetically pleasing and beautiful objects and materials. Children at this stage are developing their imagination, morality, and their ability to think abstractly. They want to know their place in the world and universe, hence Montessori’s idea of Cosmic Education. She firmly believed that a lesson which struck the child’s imagination would motivate him and have long-lasting effects. She believed that there is a new found sense of freedom and children are allowed to make their own decisions as to which activities to chose. The interests they choose lead them to ask more questions and research and make new observations. Having so many materials in the Montessori classroom allows the children to create their own curriculum.

The role of the teacher in a Montessori classroom is not to be an expert in all areas. Because the teacher allows the children to freely choose that which interests them, she shows respect for the child by acknowledging that the child knows what is right for him/her at that time. The Montessori teacher is responsible for creating and maintaining a well-prepared environment that is meant to encourage student exploration. She is also there to ensure that each child has the opportunity to work uninterrupted. Montessori believed that teachers should model grace, courtesy, respect and appropriate behavior at all times so that the child would learn from her example.

Differences between Montessori and Constructivists:


Stay tuned for more coverage of this thought provoking topic. We invite you to post your own thoughts or comments as well.

Please feel free to read our archived post entitled The Montessori Prepared Environment vs. A Traditional Classroom: A Teacher's Thoughts.

As much as possible, NAMC’s web blog reflects the Montessori curriculum as provided in its teacher training programs. We realize and respect that Montessori schools are unique and may vary their schedules and offerings in accordance with the needs of their individual communities. We hope that our readers will find our articles useful and inspiring as a contribution to the global Montessori community.
© North American Montessori Center - originally posted in its entirety at Montessori Teacher Training on Thursday, July 19, 2007.
Posted by Michelle Irinyi
Labels: Montessori and Public Schooling, Montessori Explained, Montessori History, Montessori Parent Resources, Montessori Philosophy, Why Montessori?
Newer Post Older Post