World Events in the Montessori Classroom: Alleviate Fear and Anxiety by Empowering Students 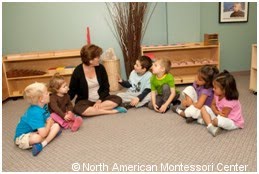 ... we see that a child has a natural tendency to adapt himself to the other human beings who surround him in a striking way. In this tendency we should strive to find a basis for a love for, and a solidarity with, all mankind.
—Maria Montessori
The Discovery of the Child.
It has been a very interesting week at our Montessori preschool, full of emotions and unusual behavior. The recent earthquake in Japan and its aftermath has been a huge topic of conversation, and it is clearly weighing heavily on the minds of many of the children. First thing Monday morning one of my Montessori students raised his hand during circle time to share some news with his classmates, and I was shocked at his interpretation of what happens during an earthquake. He began to tell his fellow students about the earthquake in Japan and said the following: “Where there’s an earthquake, the earth starts to shake and then it just opens up and swallows people. The earth swallowed lots of people in Japan and then a tsunami washed away their families.” There were a few horrified looks from several of the younger preschoolers, and I knew at that moment a discussion was needed to explain the situation clearly.

Often the emotional reaction to a traumatic event is related to how far away one is, but with television and technology bringing intense images right into our homes, we are all impacted ... especially children! Observing a catastrophe like the earthquakes and tsunami in Japan can be devastating for young children, and the visual images and emotions connected to the event can be on their minds for a long time. Children may absorb worry and sadness from their parents, and feel anxious about whether something like that will happen to them and affect their own lives.

World Events in the Montessori Classroom: Alleviate Fear and Anxiety by Empowering Students

Judging from the looks on the faces of my Montessori preschoolers on Monday morning, I knew there was much anxiety in the room and many questions. I began our discussion by presenting the Colored Continent Globe, pointing out exactly where Japan is located. We talked about the earthquake that just occurred in Japan, and we talked about what an earthquake is. We also talked about a tsunami as many of the children didn't know what that term meant, and how the tsunami affected the people in Japan.

One of the little girls said that her heart feels sad for the Japanese people, and I told her that mine does too. I reassured her and the other children that there are many people all over the world who are doing what they can to help the people of Japan, by rebuilding homes, cleaning up the area, providing food, and donating money. My four-year-old Montessori student, Jordan, suggested that we donate money to help the people of Japan and thought maybe we could have a lemonade stand on a sunny day to earn money. I was really touched by Jordan’s suggestion and his willingness to help those in need at such a young age.

I always find that when children are given the opportunity to take action and help others, it ends up being such an empowering experience, and reinforces the fact that no matter where we are in the world, we are all connected!

Because we live in an area that is susceptible to earthquakes, I then explained the importance of being prepared for an earthquake and knowing what to do if one ever occurs where we live. We reviewed the earthquake drills that we have performed in the past. We discussed our earthquake procedure, and each child had a turn to practice doing a “turtle tuck” under one of the classroom tables. If an earthquake was to occur while preschool was in session the children are taught to respond to the Montessori teacher’s command, “earthquake”. Once they hear the command, they know to DROP (drop to the floor, specifically under a classroom table), COVER (cover their head with the hands like a turtle using its shell for protection) and HOLD that position until the shaking has stopped and the “all clear” is given by one of the teachers. I invited each child one by one to show me how they drop, cover, and hold to demonstrate their best “turtle tuck” under a table. I also showed them once again where we keep each of the comfort bags, as well as the food, water, and supplies that we would need if an earthquake ever occurred.

The discussion and drill really seemed to ease their anxiety and nervousness, and it is something we will continue to do regularly. When children feel like they know what to do in a dangerous situation, and when they are able to talk about their feelings and ask questions, it empowers them and alleviates the level of fear and anxiety.

I am sure that there will be amazing survival stories and heart-warming accounts of the compassionate assistance that is being extended to the people of Japan in the weeks to come, and I will monitor these with a view to finding appropriate opportunities to focus on positive community service discussions with my young Montessori students.

As much as possible, NAMC’s web blog reflects the Montessori curriculum as provided in its teacher training programs. We realize and respect that Montessori schools are unique and may vary their schedules and offerings in accordance with the needs of their individual communities. We hope that our readers will find our articles useful and inspiring as a contribution to the global Montessori community.
© North American Montessori Center - originally posted in its entirety at Montessori Teacher Training on Wednesday, March 16, 2011.
Posted by Bree
Labels: Classroom Advice, Montessori Insights and Reflections of a Preschool Student’s First Year, Safety
Newer Post Older Post