Montessori Elementary Curriculum: When to Tell The Five Great Lessons

North American Montessori Center
One thing has been well established by our experience: that facts are of less interest to the child than the way in which those facts have been discovered. Thus children may be led to the history of human achievement, in which they want to take their part. ~ Maria Montessori, To Educate the Human Potential

Each Montessori teacher will tell the stories in his/her own way. Although there have been a great many interpretations of the five Great Lessons over the last century, the fundamental purpose of the lessons remains the same: to inspire awe, excitement, and curiosity in the students. To that end, the stories are best told passionately, with a sense of drama and wonder, using gestures, actions, animated facial expressions and vocal tones. This is one of the few instances where the Montessori teacher takes center stage!

The Montessori Five Great Lessons span about 15 billion years and follow the development of the universe, earth, life, and the inventions of written language and numbers. Here is a brief outline of each lesson:

Montessori Elementary Curriculum: When to Tell The Five Great Lessons 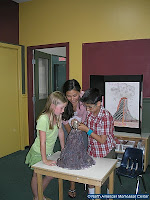 In upcoming articles, we will further explore the Five Great Lessons and their importance in the Montessori elementary curriculum.

NAMC offers instruction in The Five Great Lessons in the Lower Elementary 6-9 curriculum as designed by Maria Montessori. With utmost respect for the diversity of our international student body, NAMC in no way requires that the Five Great Lessons be taught, and leaves the decision to the discretion of our students.