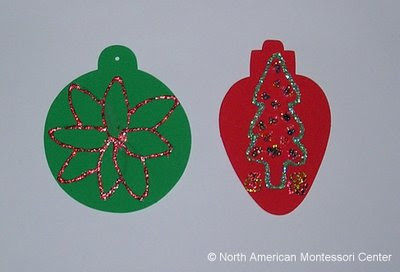 It’s beginning to look a lot like Christmas ...
Everywhere we go …
(lyrics by Meredith Wilson, 1951)

Nothing makes me smile more than hearing my Montessori students come through the door singing Christmas carols first thing in the morning. Their excitement and eagerness is contagious. I had one sixth grade boy ask if he could start a Christmas countdown on the whiteboard this morning. (I asked him to wait until next week since we still have some “serious” studying to do.)

The journal topic in our upper elementary classroom last week was to reflect and write about the symbols of Christmas. This led to a later discussion on the origins of these symbols. My students had a wonderful time researching the origins of the traditional symbols of Christmas. They found a few commonly understood and a few not so common. Here are a few they came up with. 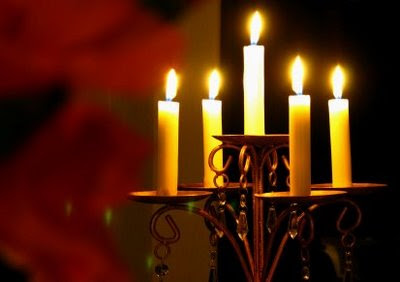 Christmas Stockings - associated with St. Nicholas, who wanted to remain anonymous and help a poor family. He threw gold coins down their chimney where they fell into a stocking that was hanging there to dry.

Holly - is an evergreen shrub with spiny leaves and red berries. Early pagans believed that its greenness was a promise that the sun would return after a dark winter. Early French and English families hung holly over their doors to symbolize a home in which Christ's birth is celebrated. The holly wreath represents the crown of thorns worn by Jesus at his crucifixion and the red berries represent his blood.

Mistletoe – another evergreen plant. Two hundred years before the birth of Christ, druids used it as winter decoration. Scandinavians associated it with the goddess of love, Frigga, where the tradition of being kissed under the mistletoe was probably started.

Mincemeat Pie – full of spices and fruit, it represents the exotic treasures of the East that the Magi brought to baby Jesus.

Tinsel - there is a legend that tells about parents who trimmed a tree while their children were sleeping. Spiders came to see the tree and left cobwebs all over it. The Christ Child came to bless the tree, turning the cobwebs to silver. 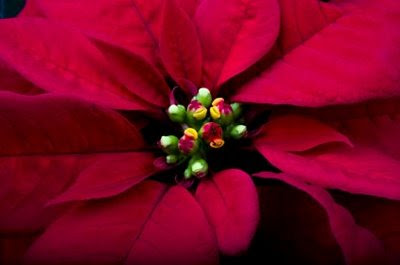 Poinsettia - native to Mexico, this bright red flower was brought to the U.S. by Dr, J.R. Poinsett, the first U.S. ambassador to Mexico, in 1825. It is said to represent the Star of Bethlehem. Legend has it that a small boy who had nothing to offer the baby Jesus, prayed at the altar of a church. His prayers were answered and the "Flower of the Holy Night" bloomed before him. [Here’s a Montessori botany lesson: Did you know that the flower of the poinsettia is actually the small yellow middle and the red “petals” are actually leaves?] 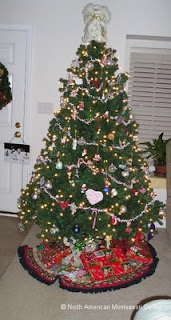 Christmas Tree – originating in Germany in the 16th century, the first Christmas trees were decorated with apples, roses, and colored paper. It is said that Martin Luther was the first to light the tree with candles. It was adopted in Britain in the 19th century and brought to American by Pennsylvania Germans in the 1820s.

There are so many ways to use these symbols in your Montessori classroom. The children can draw a picture or make decorations. They can also do a piece of creative writing – a poem, song, or even a play, about them. Or they can make up their own symbols of Christmas based on what Christmas means to them. My own students found the glitter and paint pens and were busy making decorations to take home with them. Maybe next year I’ll make some three-part cards that I’ll put on the shelf after Thanksgiving. In the meantime, I think there are some cookies that need to be nibbled on!

Merry Christmas!
See our 2007 blog: Montessori Classrooms Celebrate Holidays Around the World
As much as possible, NAMC’s web blog reflects the Montessori curriculum as provided in its teacher training programs. We realize and respect that Montessori schools are unique and may vary their schedules and offerings in accordance with the needs of their individual communities. We hope that our readers will find our articles useful and inspiring as a contribution to the global Montessori community.
© North American Montessori Center - originally posted in its entirety at Montessori Teacher Training on Friday, December 19, 2008.
Posted by Michelle Irinyi
Labels: Christmas Time, Holidays, Montessori Activity Ideas, Montessori Curriculum
Newer Post Older Post