Montessorians know that in order to promote peace and understanding of different people and cultures, it is necessary to study not only the geography and history of those people, but also to look at the human story. Looking at the ways we celebrate gives us some insight into our similarities and differences. The winter season brings many festivals and celebrations around the world. Through study and experience, children gain a better understanding of those around them. 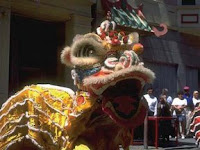 Here are a few celebrations happening around the world at this time of the year that your students will enjoy learning about!

Chanukah is Hebrew for “rededication”. It begins on the 25th day of Kislev in the Jewish calendar (usually in late November/early December). It is celebrated for eight days to honor the Jewish victory and the miracle of oil lasting for eight days to rededicate the temple.
There are several symbols that represent Chanukah.

Chinese New Year is a 15-day celebration which starts with the New Moon on the first day of the New Year. New Year's Eve and New Year's Day are celebrated as family holidays, a time of reunion and thanksgiving. The celebration was traditionally a religious ceremony given in honor of Heaven and Earth, the gods of the household and the family ancestors. The honoring and sacrifices to the ancestors is most important as it unites the living members with those who had passed away. Departed relatives are remembered with great respect because they were responsible for laying the foundations for the family.

Eid marks the end of Ramadan (see below). Eid is Arabic for “festivity”. Muslims wear their best clothes and give money to the poor. Families wake up very early, say their first prayer of the day, and eat a little to symbolize the end of Ramadan. They then go to pray at mosques. Afterwards, they greet and hug each other in the spirit of peace and love. They then visit friends and relatives to give thanks. Eid ul-Fitr is a joyous, religious occasion celebrating the achievement of enhanced piety. It is a day of forgiveness, moral victory, peace fellowship, brotherhood and unity. Muslims thank God for the help and strength that he gave them through the previous month to help everyone practice self-control. It is a time of giving and sharing. Diwali
Diwali is a five-day holiday celebrated by Hindus. Diwali means “rows of lighted lamps” and is often called the Festival of Lights. During Diwali, homes are cleaned and windows are opened to welcome Lakshmi, goddess of wealth. Candle and lamps are lit and gifts are exchanged. It is celebrated during October or November.

Kwanzaa was created by Dr. Maulana Karenga in 1966 and developed from the elements of African heritage. Kwanzaa is a seven-day celebration (December 26 – January 1) and is built around seven principles known as “Nguzo Saba”. Each day a candle is lit to represent each principle.

There are many symbols of Kwanzaa.

Ramadan is the ninth month of the Muslim calendar. During the month of Ramadan, Muslims fast from sunrise to sunset. In the evening they eat small meals and visit with family and friends. It is a time to worship and take extra time for family, inner reflection, and spiritual growth.

In Japan, Shichi-Go-San means Seven Five Three. Odd numbers are considered lucky numbers in Japan. Shichi-Go-San is a festival for girls who are three and seven years of age and boys who are three and five years of age. On November 15th (or the closest weekend), children dress in their finest clothes, either traditional kimonos or western-style clothing. They visit shrines ensure a future free of sickness and misfortune. The children are given candy called chitose-ame in a long white paper bag covered with symbols of luck and longevity such as the pine, bamboo, plum, crane, and tortoise. Chitose-ame means “thousand-year candy”, signifying many years of life.

In Sweden, December 13 is St. Lucia’s day and represents the beginning of the holiday season. St. Lucia lived during the first century of Rome. She was tortured and killed by Emperor Diocletian because she would not give up her faith to marry an unbeliever. Stories of her courage were brought to the Swedes by missionaries. It is said that she would go out early in the morning, clothed in white robes and a crown of light, bringing food and drink to the poor.

Today, the oldest daughter brings her parents a breakfast of sweet saffron buns and coffee while wearing a white gown and a crown of holly. Her siblings follow her, also dressed in white and carrying candles.

Solstice means “sun standing still”. In the Northern Hemisphere, it signifies the first day of winter and marks both the shortest day and longest night of the year. It occurs on the 20th, 21st, or 22nd of December.
To druids, Winter Solstice was the night of the Great Mother Goddess who gave birth to a new sun, restarting the beginning of the seasons. It is also called Yule; the day the Yule log was added to the bonfire around which they would dance to awaken the sun from its winters sleep.

During Roman times it came to honor Saturn’s, the harvest god, and Mithras, the ancient god of light. This form of sun worship had come to Rome from Syria a century before with the cult of Sol Invites. It announced that winter is not forever, that life continues, and provided encouragement to cold, dreary times.

Young children learn about these celebrations through stories and songs, as well as from guest speakers. Older children are able to do more research. They should be able to answer the following questions:

Learning about holidays and celebrations should be fun. Bring in as many “real life” examples as you can. It’s a great way to build community and create a sense of unity and peace.

You will find more on Cultural Celebrations around the World in NAMC's Lower Elementary program and curriculum .
As much as possible, NAMC’s web blog reflects the Montessori curriculum as provided in its teacher training programs. We realize and respect that Montessori schools are unique and may vary their schedules and offerings in accordance with the needs of their individual communities. We hope that our readers will find our articles useful and inspiring as a contribution to the global Montessori community.
© North American Montessori Center - originally posted in its entirety at Montessori Teacher Training on Wednesday, December 12, 2007.
Posted by Michelle Irinyi
Labels: Chinese New Year, Christmas Time, Cosmic Education, Eid, Hanukkah, Holidays, Montessori Culture Studies, Montessori Philosophy, Ramadan, Shichi Go San, Solstice, St. Lucia
Newer Post Older Post