Why Aren't My Students Normalized? Deviations in the Normalization Process 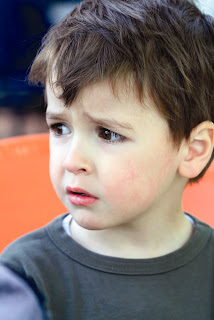 If you're a Montessori teacher like me, you've probably caught yourself at times wondering "Why aren't these children normalized yet?" After all, I'm doing everything I've been taught to do. I speak in a quiet and respectful voice, my Montessori classroom is beautiful and the environment is well-prepared. I present my lessons using a 3-period model and I've spent much time working on and creating beautiful materials. So why won't Julia share the red shovel? Why does Jason still cry when mommy leaves? Why does Sofia continue to run and skip around the classroom instead of using walking feet?

Dr. Montessori referred to these misbehaviors as "deviations", or detours from normalization. The deviations are created when development is not allowed to proceed in a normal way. If the misbehavior is not corrected, it will only become worse as time progresses.

"Why Aren't My Students Normalized?" Deviations in the Normalization Process


Dr. Montessori classified deviations in two categories: deliberate (adult-fostered) and non-deliberate (those not fostered by adults). Deliberate deviations are caused by the lack of purposeful activities in the home and/or school environment. These children feel the need to be constantly entertained. They are continually bouncing between toys, TV, and computer time to alleviate boredom, but nothing holds their interest for very long. These children may also have the tendency to cling to a parent or older sibling well beyond the developmental plane of letting go. This is because their independence has been denied and they are unable to recognize themselves as a separate person.

There are several deviations that are not fostered by adults and are often seen as "normal" stages of development. Dr. Montessori referred to these as deviations as fugues and barriers (The Secret of Childhood) and deviations that are demonstrated by the strong and the weak (The Absorbent Mind). 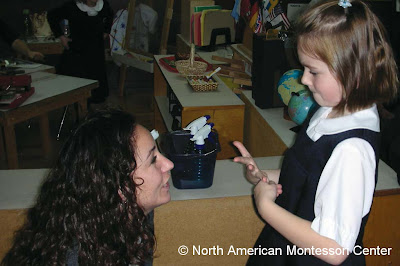 So how is an adult to help a child overcome these deviations and help them along the path to normalization? Dr. Montessori stated that first the Montessori teacher must practice patience rather than anger. An adult who is impatient or angry cannot build confidence or independence in a child. She recommended interrupting the misbehavior because it is an obstacle to development, and to offer interesting and purposeful activities to re-channel that energy in a productive way. She believed the only way to re-direct misbehavior was to return to the work cycle. Once the child has returned to a state of normalcy, the adult must not interrupt while the child is focused and concentrating. By observing and protecting those moments, they will become more frequent and the child will not have to deviate as much. His energy will have found a new outlet in his work.

More in this Blog Series:

As much as possible, NAMC’s web blog reflects the Montessori curriculum as provided in its teacher training programs. We realize and respect that Montessori schools are unique and may vary their schedules and offerings in accordance with the needs of their individual communities. We hope that our readers will find our articles useful and inspiring as a contribution to the global Montessori community.
© North American Montessori Center - originally posted in its entirety at Montessori Teacher Training on Saturday, April 26, 2008.
Posted by Michelle Irinyi
Labels: Classroom Advice, Experience, Learning Difficulties, Montessori Explained, Montessori Routines, Normalization
Newer Post Older Post